How Often Do Catchers Sit in Day-After-Night Games?


The most physically challenging position in baseball is, without question, catcher.  It takes a lot to squat behind home plate for a couple hours every night, and there is understandably a refractory period for catchers, particularly for older ones.  It’s usually not a big deal for a catcher to play a few games in a row when there’s a full 24 hours between games, maybe taking a breather once or twice per week, but what about when a catcher barely gets a full night’s sleep before having to don his mask and pads again?

We all know that catchers need to rest every now and then, but what if we were able to predict when a large chunk of the catching population would be doing so simultaneously?  This would make the guys who aren’t sitting that day all the more valuable by comparison—and give you a leg up on those who drafted their teams before lineups were announced and are taking zeroes from the catching spot.

The theory goes that catchers tend to sit more frequently during day games that follow night games to give them extra rest, so I wanted to check whether this was true and to what extent.  To do this, I examined a six-year stretch of recent history in which a team played a night game followed by a day game.  I then tallied all the times that a team’s starting catcher—defined as any catcher who started at least 65% of a team’s games at the catcher position (no 1B or DH) over the previous two weeks—started the night game and sat during the game.  I also broke it down by age since we’d logically expect older catchers to need some extra down-time:

Since starting catchers generally sit 30% of the time or so, we do indeed see that catchers sit more frequently in day games following night games, although 45% seemed a little lower that I initially expected. Then I considered that catchers will often DH in these day games to stay in the lineup, some are just durable, and some are younger and can handle the added workload.  To better visualize how age plays a part, take a look at these numbers in chart form: 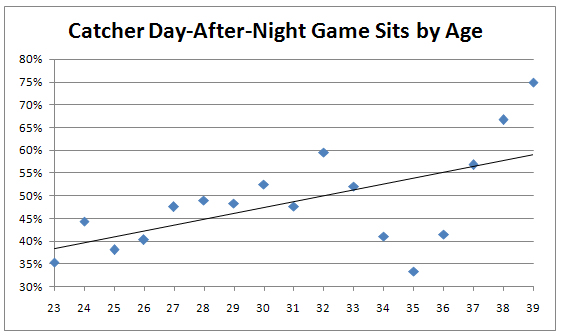 We’re dealing with small-ish samples, but there does appear to be a trend.  Before Age 26, catchers barely sit any more during day-after-night games than they do normally.  Once they hit 27 they start sitting close to half the time, and after 32 they’re sitting more than half the time (the age 34-36 blip is likely sample-size-related).  Overall, a catcher sitting in a day-after-night game is explained 35% by age (r-squared equals 0.35).

Among MLB’s current 28 starting catchers (I’m excluding Ryan Hanigan/Devin Mescoraco and John Jaso/Derek Norris), the average age is 28.3 years old.  Nineteen of them are 27 or older, and five of them are 32 or older.

So why is this important for daily leaguers?  Well, because day-after-night games are relatively common.  Almost every Sunday, roughly half of baseball plays day-after-night games.  The same goes for holidays—sometimes to a greater extent.  This means that on any given day-after-night, more than one-third of baseball’s starting catchers will not be playing*.  As a result, this makes all of those who are playing, more valuable, particularly the elite ones (especially if most of those sitting are elite themselves).  It may also present an opportunity to plug a good backup catcher into your lineup for cheap (say, David Ross).  And, as I alluded to earlier, it puts you in a position to capitalize on the mistakes of opponents who aren't paying enough attention to know that the catcher they selected isn't playing that day.  The effects here aren't huge, but they're worth recognizing.


You May
Recognize Me From: